WHAT WE'VE BEEN THINKING ABOUT RECENTLY

While Google updates its search algorithm around 500 to 600 times each year, some updates are more significant than others. Take Google’s latest broad core algorithm update for example. Appropriately named the March 2019 Broad Core Algorithm Update, this update led to serious fluctuations in the SERPs and largely affected the Autos & Vehicles, Health, and Pets & Animals categories.

One of the first major Google algorithm updates, however, was the Florida updated which rolled out on November 16, 2003. As a result of the update, several websites were hit with penalties or revoked from the search engine completely, leaving many business owners at a loose end. Following the Florida Update, we saw the Jagger Update 2 years later which was rolled out in three phases: Jagger 1, Jagger 2 and Jagger 3, the Big Daddy Update, and the Vince Update in January 2009. 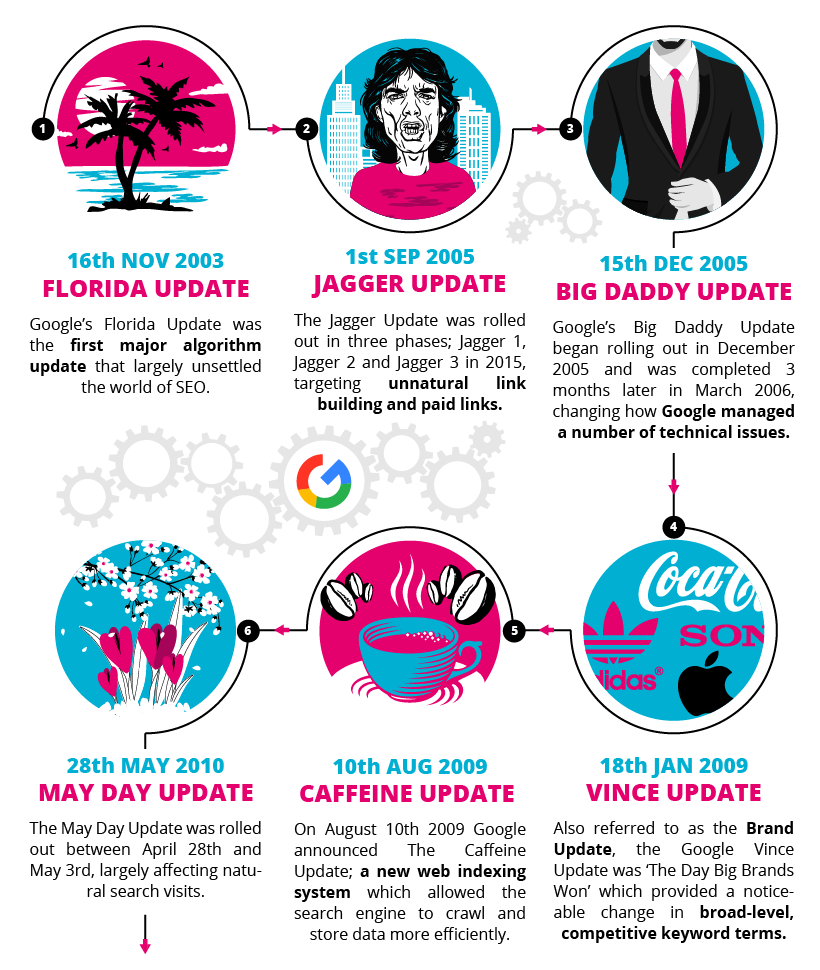 After the Vince Update in January 2009 came the Caffeine Update which aimed to provide “better indexing and fresher search results” which meant that Google would be able to crawl sites more efficiently. While the Caffeine Update wasn’t an algorithm update as such, it was a rebuild of the previous indexing system to enhance the efficiency of the search engine.

However, just two years later in February 2011, Google announced its next major update; the Panda Update. Google’s Panda Update is one that rocked the world of SEO and one that remains relevant to search engine optimization today. 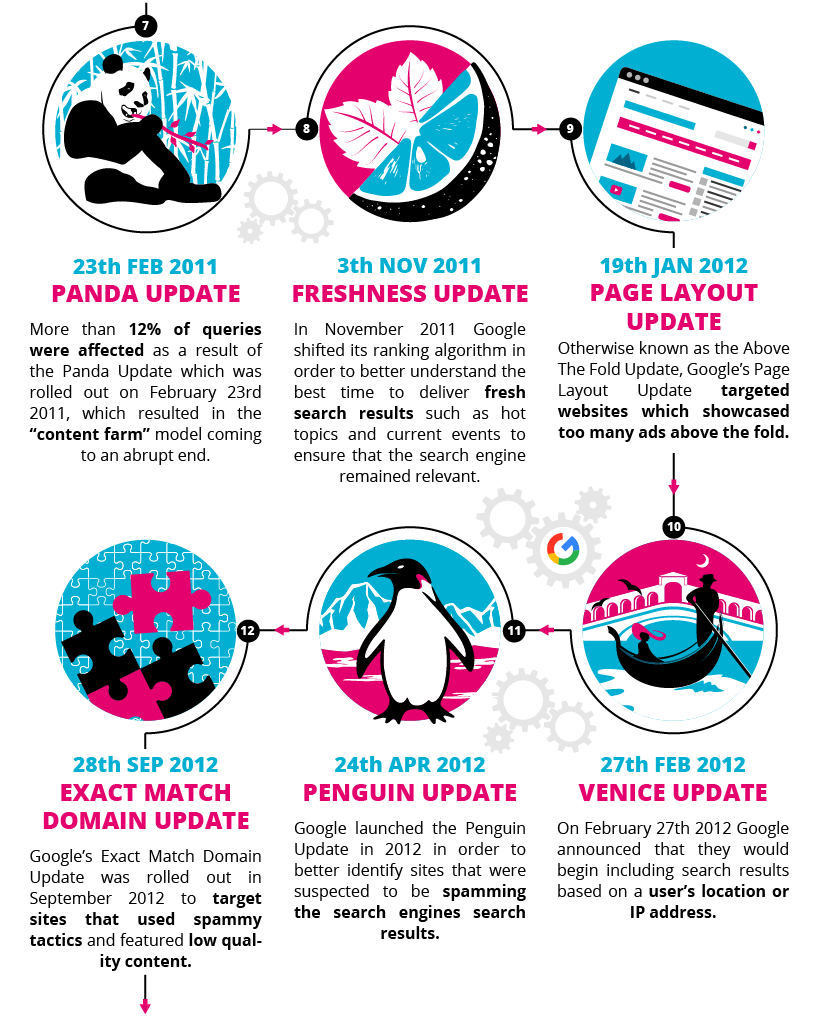 After the Panda Update which affected websites such as Wisegeek, the Penguin Update came into practice in April 2012. Google stated that: “We look at it something designed to tackle low-quality content. It started out with Panda, and then we noticed that there was still a lot of spam, and Penguin was designed to tackle that.” Several newer versions of the update were then released including Google Penguin 2.1, Google Penguin 3.0 and Google Penguin 4.0 in September 2016. Google’s Exact Match Domain Update also rocked the world of SEO in 2012, targeting sites that used spammy tactics and featured low-quality content in a bid to improve user experience.

In 2013 Google rolled out a number of updates including the Hummingbird Update, Pigeon Update, Mobile-Friendly Update, and Quality Update in May 2015. Unlike Google’s Panda and Penguin Update, the Hummingbird Update was said to be “a complete overhaul of the core algorithm”, largely affecting content. In a blog written after the update was rolled out Neil Patel advised businesses to ensure that their site featured a comprehensive FAQ page, Q&A blog category, ‘ask the expert’ type posts, and ‘how-to’ posts.

2 years later Google rolled out the Mobile-Friendly Update, which is better known as Mobilegeddon. As the name suggests, the update aimed to boost mobile-friendly pages in the search engines mobile search results. In order to ensure that a site is mobile friendly on-page content should not be wider than the screen, links mustn’t be too close together and the text much is large enough to read without having to zoom in. 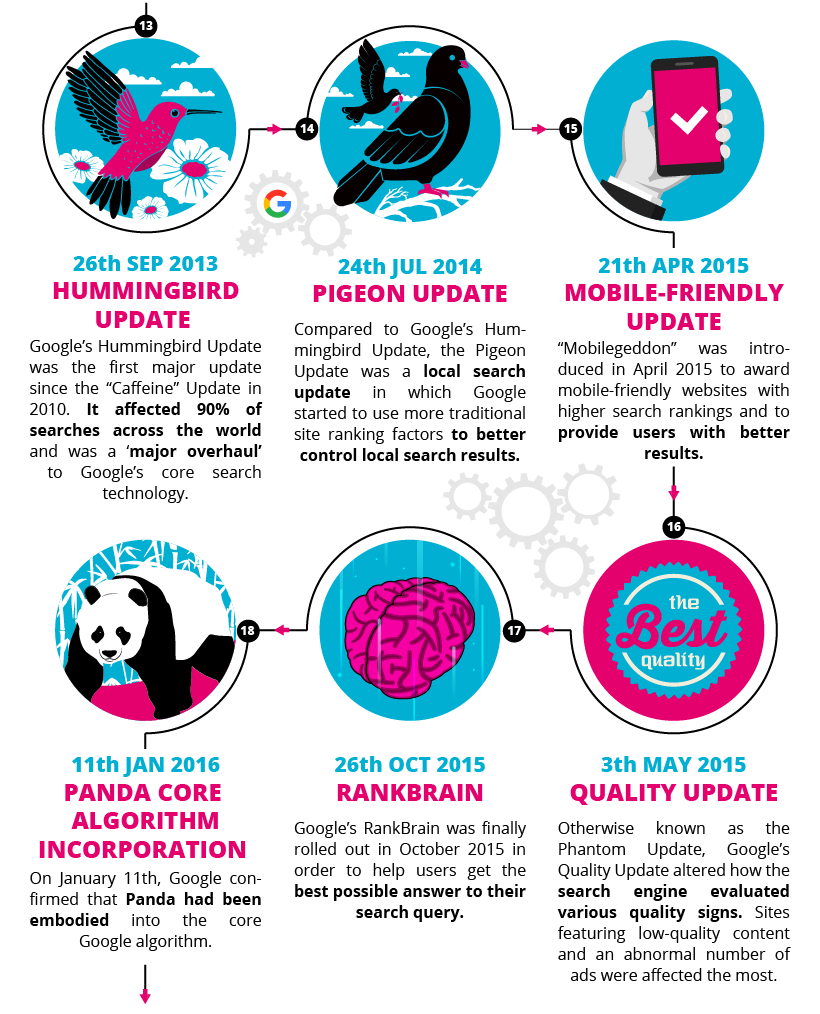 Google’s RankBrain was rolled out in October 2015 just like any other update, but what set it apart from the rest was the machine learning aspect of the algorithm. The update, which was rolled out over several weeks, was created to enhance the way the search engine processed search results in order to ensure results remained relevant to users. 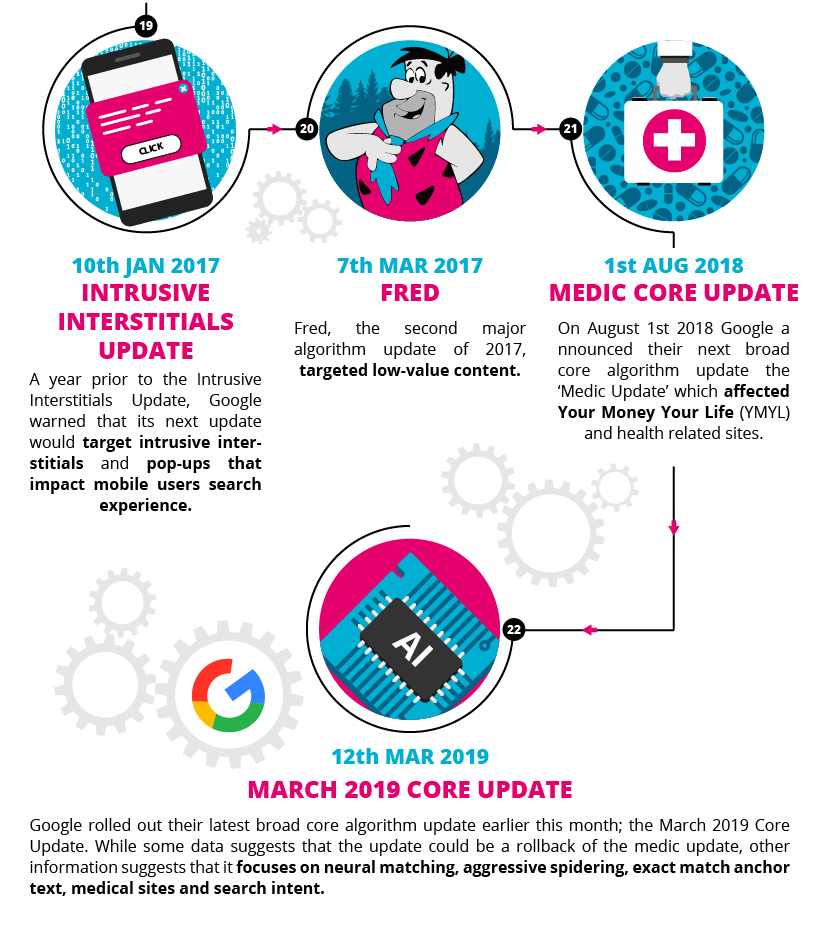 In August 2018 Your Money Your Life (YMYL) and health-related sites were taken by a storm as a result of the Medic Core Update. In a series of Tweets, Google stated that:

“This week we released a broad core algorithm update, as we do several times per year…”

“As with any update, some sites may note drops or gains. There’s nothing wrong with pages that may now perform less well. Instead, it’s that changes to our systems are benefiting pages that were previously under-rewarded…”

“There’s no “fix” for pages that may perform less well other than to remain focused on building great content. Over time, it may be that your content may rise relative to other pages.”

The most recent Google Algorithm Update, however, is the March Broad Core Algorithm Update which was announced on 13th March. Two days later, Google SearchLiaison officially named the algorithm update in a Tweet:

“We understand it can be useful to some for updates to have names. Our name for this update is “March 2019 Core Update.” We think this helps avoid confusion; it tells you the type of update it was and when it happened.” 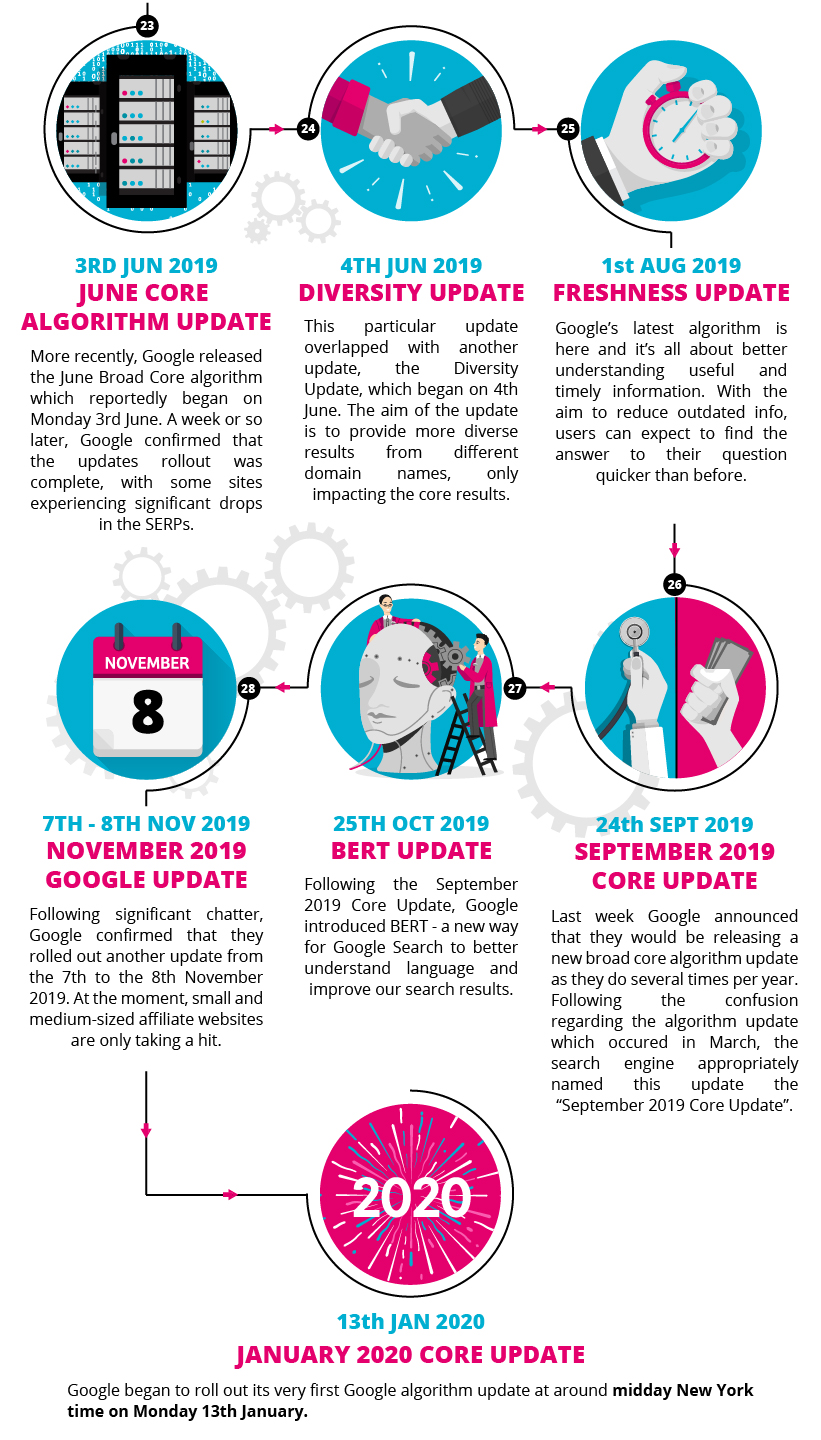 Within the chain of Tweets announcing the algorithm update, Google suggested that webmasters review the Search Quality Rater Guidelines, now a 166-page document referring to how businesses can increase their pages ratings. Despite speculation, this update is not a Panda Update despite Panda being a part of Google’s core ranking algorithm.

Following the Core Update, it was confirmed that the Diversity Update was amid being rolled out, with Google stating that:

“A new change now launching in Google Search is designed to provide more site diversity in our results.” “This site diversity change means that you usually won’t see more than two listings from the same site in our top results.”

Here at Absolute Digital Media, we’re conducting a full analysis to look for trends in this latest update to ensure that our client’s campaigns can continue to generate the desired results and identify how we can protect sites in the future.

With Google expected to update their algorithm up to 600 times each year, it’s important to identify how you can enhance your site. For more information about our services including SEO, get in touch with a member of our expert team on +91 141 267 09 08, today.

Previous Post What Is Search Intent & Why Is It Important?
Next Post Why Is Google Tag Manager So Important?

Why On-Page SEO Is Important

This website uses cookies to improve your experience while you navigate through the website. Out of these cookies, the cookies that are categorized as necessary are stored on your browser as they are essential for the working of basic functionalities of the website. We also use third-party cookies that help us analyze and understand how you use this website. These cookies will be stored in your browser only with your consent. You also have the option to opt-out of these cookies. But opting out of some of these cookies may have an effect on your browsing experience.
Necessary Always Enabled
Necessary cookies are absolutely essential for the website to function properly. This category only includes cookies that ensures basic functionalities and security features of the website. These cookies do not store any personal information.
Non-necessary
Any cookies that may not be particularly necessary for the website to function and is used specifically to collect user personal data via analytics, ads, other embedded contents are termed as non-necessary cookies. It is mandatory to procure user consent prior to running these cookies on your website.
SAVE & ACCEPT